Learn to Fish Like a Dolphin on National Dolphin Day 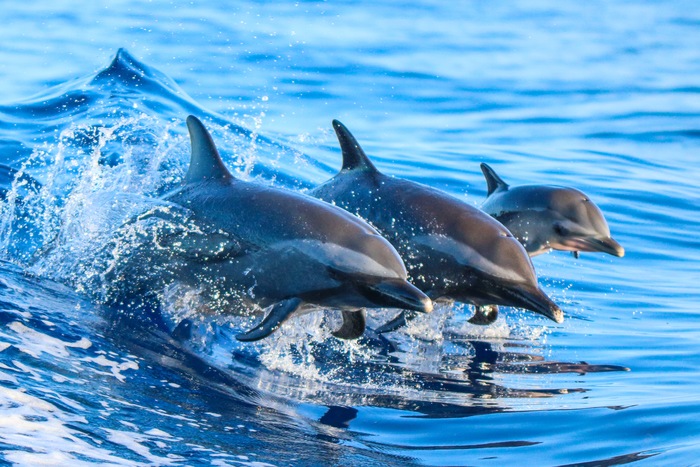 Dolphins—what can’t they do? In addition to being some of the ocean’s most social animals, and extremely intelligent communicators to boot, these beloved marine mammals can help us improve our angling skills, too!

In honor of National Dolphin Day on April 14th, we’re taking a look at some of the savvy fishing tips we can learn from dolphins. Let’s jump in.

To celebrate National Dolphin Day, it can be fun to fish for (and dine on) the same species the dolphins love! What are those, anyway?

First and foremost, dolphins love fish (they, themselves, are not fish but mammals). The type of fish they eat depends on where they are in the world, since dolphins can be found in waters across the globe. One of the dolphin’s favorite fish is a delight among human diners, too—cod. Pair yours with a lemony sauce that plays well with cod’s mild flavor!

Among other things, dolphins also eat shrimp and squid, so for a dolphin-inspired dinner, you can’t go wrong with fresh, fried calamari or blackened Cajun shrimp for a sharp, smoky touch.

How they land the catch… and how you can, too

Now that you know what dolphins “fish” for, you may be wondering how they do it. Of course, they don’t need fishing rods, lines, and bait—but they do have a set of smart strategies that might prove helpful for anglers like you.

Known for their extreme intelligence and community skills, dolphins tend to catch fish by herding them together. Dolphins know that two, three, four or more dolphins are better at landing the catch than going solo, so they work together to surround a group of fish—this way, the fish can’t get away, and dolphins don’t have to move far to grab their dinner. It might be impractical to try the same technique with a bunch of boats, but we think the dolphins’ teamwork still teaches an important principle on the water—we’re better together! If you’re sharing the water with fellow boaters, you can communicate with each other to share when you’ve found a particularly fruitful spot (unless, of course, you’re competing in a tournament!). Friends on board can also help each other while fishing—one person can have their line in the water while the other sits up at the second station or aft to scan for action, for example.

Another source of angling inspiration? Dolphins also love to ride behind boats’ wakes, just like some of the faster-moving fish! That is why trolling is such a helpful technique for anglers looking to catch mahi-mahi, wahoo and more.

We’re already learning a lot about angling from our dolphin friends, but do they ever actually intend to help us fish? Yes—well, sometimes! In a few communities around the globe (most notably off the coast of Laguna, Brazil), dolphins have actually been observed helping local fishermen. They herd together a species, such as mullet, and flap their tails to let the fishermen know where to throw their nets. These dolphins are fondly known and named by the local fishermen—and while they help those on land, their cooperation helps themselves, too, since it is theorized that the humans’ use of nets confuses the fish schools and scatters them, so that the ones that remain in the water can be more easily accessed by the quick-thinking dolphins.

This may be a unique relationship—but even on your everyday angling adventures, dolphins can still help you without even knowing it! By learning their movements and observing, from afar, where they like to eat (you’ll know a pod has found food by the way it splashes around over a specific spot of water), you can get a better idea of how to find success on the water.

On National Dolphin Day and beyond, take a page out of the dolphins’ book and see if these tips help you land the catch!

Make a Splash with Spring Fishing: A 5-Step Guide

Our Favorite Tournament Tips 7 Ways to Identify Your Catch Every Time What Happens When You Catch a Great White Shark? Just in Time for Thanksgiving: Meet the Turkeyfish Fishing Fort Lauderdale: Boat Show and Beyond Turn Thanksgiving Leftovers into Fishing Fuel Discover How to Fish From the Shore: Our Guide to Surf Fishing Robalo?s Guide to Shallow Water Excursions