Just in Time for Thanksgiving: Meet the Turkeyfish 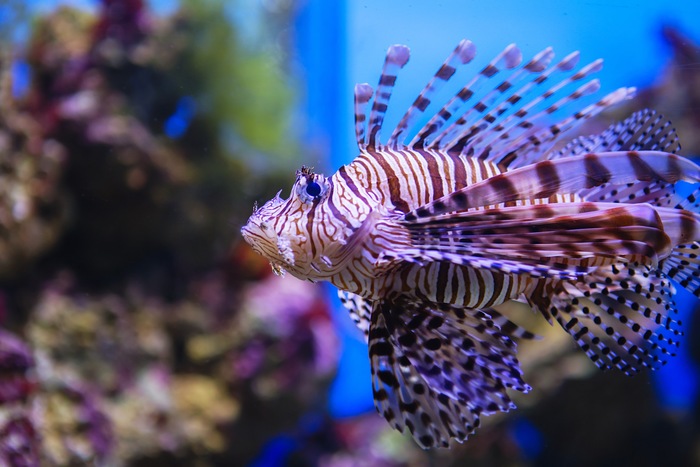 On Thanksgiving, we’re all about turkey—even below the surface!

As it turns out, a peculiar creature nicknamed the “turkeyfish,” officially known as the lionfish, is the topic of much interest among the scientific and angling community.

Seeing one of these perplexing fish in the wild is sure to take your breath away—but many in the scientific community would rather take the fish away, considering its status as an invasive species.

But still, there’s a lot to learn (and love) about the turkeyfish, especially as we celebrate Thanksgiving. Read on as we learn more about the one-of-a-kind creature, as well as a few ways fishing for one can help the natural environment. Just take a look.

A glimpse of the turkeyfish

If you’ve ever spotted the turkeyfish in the wild, you know it is something truly special. The fish’s bold brown striping and famous fins that fan out like vividly-colored turkey plumage are sure to catch your eye. When the fish moves, the majestic effect is amplified, as you watch—in awe—its shape meander through the water, past the colorful coral reef it especially likes to call “home.”

Of course, for as beautiful as the aptly named turkeyfish may be, it’s not particularly beloved by those who study the ocean—at least, not in the Atlantic.

The turkeyfish is native to the Indo-Pacific, but its introduction to the Southeast United States and Caribbean (from Fort Lauderdale to Miami Beach to the sunny shores of the Florida Keys, Bahamas and beyond) has impacted the local ecosystem, since the turkeyfish has no natural predators here. It feeds on popular species’ young (think snapper and grouper), so its presence has an effect on the commercial and recreational fishing industry, too.

How much could one little fish really do, though? Enough for Florida Fish and Wildlife to host a Lionfish Summit earlier this year—a gathering of experts in an effort to determine, exactly, what can be done about the persistent species.

What you can do

As we wait for more specific action, however, there are a few things you can do to help curb “turkeyfish” populations. One of them is to go fishing! Or, more specifically, spearing, or catching the turkeyfish with a net as you dive. But the turkeyfish fins are venomous, so if you are not experienced in this area, you may wish to simply watch from afar and “do your part” at the dinner table. Find a turkeyfish recipe you like (no, its white meat does not actually taste like turkey—but it is renowned, akin to favorites like hogfish or grouper) or, better yet, dig in at one of Florida’s many seafood restaurants and indulge in the unique, Floribbean flavor.

Whether you’re fishing or diving the warm Atlantic waters, keep an eye out for this unique invader and its famous, fluttery “feathers.” One thing is for sure—there’s nothing else quite like it!

Take a Virtual Tour of Arizona's Most Beloved Lake

Discover How to Fish From the Shore: Our Guide to Surf Fishing

Our Favorite Tournament Tips 7 Ways to Identify Your Catch Every Time What Happens When You Catch a Great White Shark? Robalo?s Guide to Shallow Water Excursions Fishing Fort Lauderdale: Boat Show and Beyond Take an On-the-Water Scavenger Hunt with Robalo Fishing Takes Flight: Tips for Using Birds? Help to Find Your Next Catch Summer Destination: Waters Flourishing with Mahi-Mahi