What Happens When You Catch a Great White Shark? 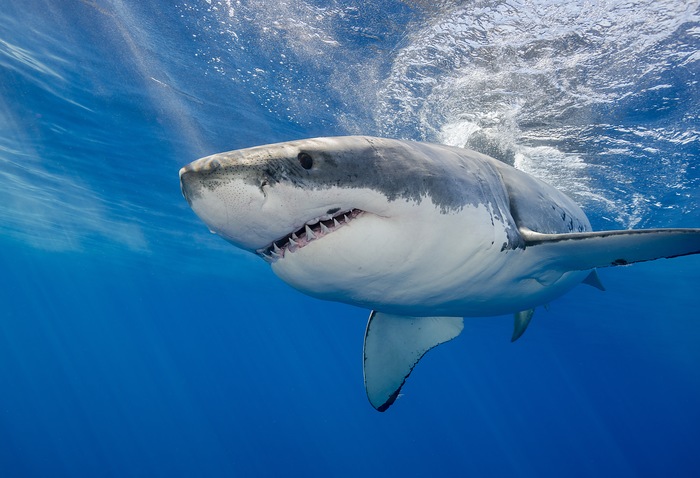 What would you do if you were out fishing with friends… and happened upon a great white shark at the end of your line?

That’s exactly what happened to one New Jersey crew this July, when Chris O’Neill and his crew went out fishing for mako, and ended up with something a little bigger than they bargained for.

Their riveting story has been making the rounds—and it’s also taught us a thing or two about the thrills (and practicalities) of being an angler! Read on as we explore the story and share a few of our key takeaways.

He caught a great white shark when he wasn’t even trying! O’Neill’s trip originated offshore of Atlantic City, and the day began simple: with the crew fishing for tuna. Later, they moved onto something bigger, the fast-moving mako shark, which they searched for around an old sunken steamer ship (remnants of the Robert J. Walker). Of course, they couldn’t anticipate just how big their fateful catch would be—a great white shark, which the crew took around 15 minutes to reel in. After that, they realized it wasn’t the mako they had been expecting. O’Neill and his crew cut the line and set the shark, a juvenile, free.

We learned a few things from the story—some helpful reminders that are good for every kind of angler, even those who’ve yet to land a surprise like this…

Scope out the perfect spot

O’Neill’s crew probably wasn’t expecting to land a catch quite as big as a great white—but nevertheless, they were right to expect some action over the Walker shipwreck! This is because of the tendency of fish to seek out shelter—shipwrecks, even artificial ones, serve as natural cover for smaller species, upon which the bigger game (mako, for example) feed. It’s no wonder why artificial reefs are routinely created from decommissioned ships, rigs and other materials—it’s good for the fish and, as a result, for the fisher, too. Anglers can follow in O’Neill’s lead and find a wreck or artificial reef that’s known for good fishing near them!

One of the best parts of the story is just how prepared O’Neill and his crew were. They knew the types of species they were allowed to fish for, and the ones they weren’t—so when they inadvertently caught a prohibited fish, the great white, they “knew exactly what it was,” as O’Neill told NJ.com, and set it loose. For an angler, good preparation involves knowing about the fish below the surface, as well as the local rules that govern the sport. You can brush up topics like catch-and-release, no-take fish and sustainable fishing practices, too—just check out your state’s fishing or wildlife website!

…and expect the unexpected

Of course, angling always brings about a bit of the unexpected—that’s what we love about it! By learning to “go with the flow” and ready yourself for changing plans and spur-of-the-moment switches on the water, you can enjoy an adventure bigger than you thought possible, much like this New Jersey crew found out firsthand.

When O’Neill set the shark loose in the water, he made sure to snap a photo of it—and we would, too! Moments that big, exciting and unexpected deserve to be preserved, so be sure to keep a camera or smartphone handy wherever your angling adventures take you this summer.

Who knows what you’ll find on your offshore adventures this summer? Like O’Neill and co. showed us, being prepared on the water paves the way for some seriously serendipitous encounters. Just get out there and see for yourself!

Could a Giant Catfish Cause an Earthquake? Yes! Kind of...

Our Favorite Tournament Tips 7 Ways to Identify Your Catch Every Time Fishing Fort Lauderdale: Boat Show and Beyond Just in Time for Thanksgiving: Meet the Turkeyfish Robalo?s Guide to Shallow Water Excursions Turn Thanksgiving Leftovers into Fishing Fuel Discover How to Fish From the Shore: Our Guide to Surf Fishing Take an On-the-Water Scavenger Hunt with Robalo

7 Ways to Identify Your Catch Every Time Robalo's Guide to Keeping Your Catch Fresh for Longer 5 Restaurants That Will Cook Your Fresh Catch Happy St. Patrick's Day: 5 Ways to Go Green on the Water
©2023 Robalo Boats, LLC. - all rights reserved.