Could a Giant Catfish Cause an Earthquake? Yes! Kind of... 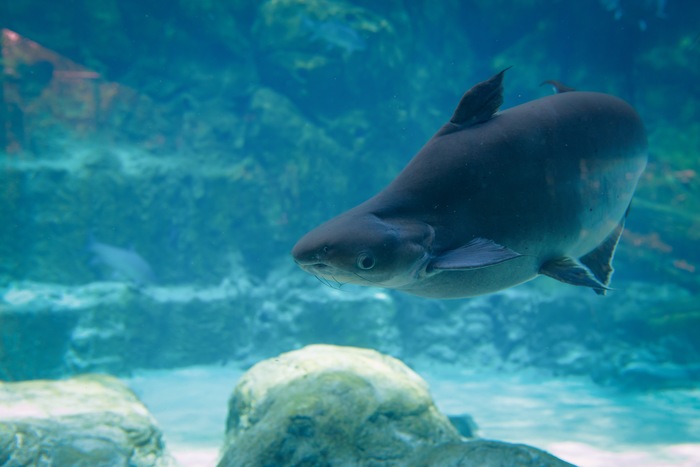 Could a giant catfish cause an earthquake? According to the Japanese legend of Namazu, it certainly could!

The legend of larger-than-life water dwellers is a common theme that’s woven through many cultures’ mythos—but no story is quite like that of Namazu, the whopper of a catfish who was said to shake the Earth with its movements beneath the water.

But does a fish this large really exist? Read on as we explore the legend of Namazu, and other giant catfish tales from across the globe.

Get to know Namazu

Since the 17th century, the catfish (locally known as Namazu) held a significant place in Japanese culture, serving as a sort of signal of danger to come. But it wasn’t until the 1855 Edo Earthquake, a particularly damaging event, that the Japanese people adopted Namazu into their mythology as the specific root cause of such tremors—a “god of world rectification,” with the power of righting moral wrongs in society through natural events.

That’s a lot to take in—but the legend gets even bigger. To get an idea of the sheer size of Namazu (a fish who, by all mythological accounts, was large enough to move the Earth with its thrashing-about), you need only look at the enormous measures taken to keep the fish still. The god Kashima is depicted in artwork holding Namazu down with a huge rock, and even that wasn’t always enough, since one slip-up by Kashima could lead Namazu to move around and cause another quake. Who would’ve thought that one fish could prove so troublesome?

Why was a catfish chosen as a portent of earthquakes… and not, say, a large elephant, or perhaps something more menacing?

It might just have something to do with the real-world behavior of catfish. Modern studies lend credence to the myths of antiquity—namely, that catfish could somehow detect earthquakes before they even occurred. One experiment at the Tokyo Metropolitan Marine Experiment Station suggests as much: In a 16-year study, researchers monitored catfish every day to track their behavior. Before 31 percent of earthquakes, all of the fish acted uncharacteristically energetic, while some of the catfish in the crew were even more spot-on in their “predictions,” acting up before 60 to 70 percent of all earthquakes. Perhaps they were more sensitive to changing electrical fields, the study suggested, having acquired a sort of surplus scent to make up for their poor eyesight (they do spend all of their time at the bottom of a river, after all!).

Incidentally, one researcher suggested that this pattern should only be applied to Japanese catfish—not American varieties, which might be better enjoyed for their taste, and not their tremor-detecting skills. But is there really much of a difference among all the world’s catfish? In a word, yes!

Giant catfish from around the world

Catfish across the globe share similar properties—they stick to the bottom of the water and have those famously feline “whiskers,” or barbels. But apart from these key similarities, catfish can be very different depending on the place you find them. The catfish you’ll find in American waterways (like blue, channel and flathead) are sometimes big—record blues and flatheads have weighed in at over 100 pounds, for example—but never quite as large as the varieties found in Europe, like the wels, which can weigh more than 200 pounds, or the Mekong catfish, a regionally-secluded species, respected in Thai culture, which once weighed in at a whopping 646 pounds. Maybe it was this sort of catfish that Japanese artists had in mind when depicting Namazu… because the true, common catfish of Japan doesn’t come close in terms of size!

Now that you know the scale of catfish around the world, we’d like to know—what was the largest catfish you’ve ever caught? Share your story with us in the comments below!

What Happens When You Catch a Great White Shark?