A Fall Trip to Summerville 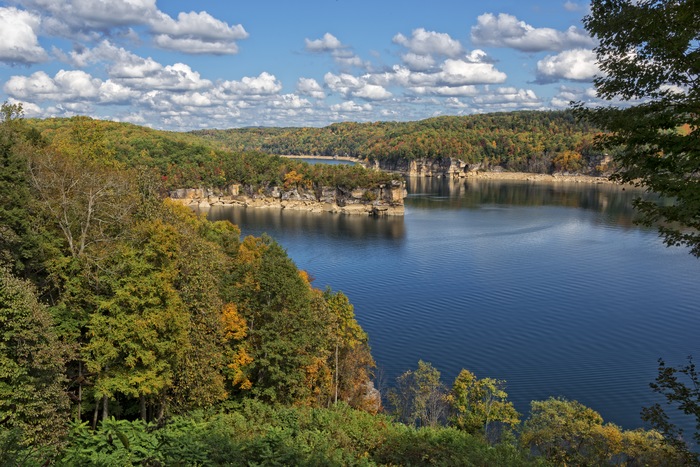 Whether you’re in town for fishing fun, an easygoing cruise or simply to soak up some local culture, Summersville Lake offers you a chance to do it all. Its idyllic appeal is something for the whole family—an all-ages escape that serves as an aquatic retreat from the rocky, rolling landscapes that surround it.

Read on as we explore Summersville Lake and its one-of-a-kind persona below.

What's in a name?

A name like “Summersville” conveys everything that is good about time on the water—sunshine, vacation, long days spent doing the activities you most enjoy. In all these respects, Summersville Lake lives up to its name… but it almost wasn’t Summersville at all!

As a man-made reservoir, the U.S. Army Corps of Engineers was tasked (as is custom) with naming the body of water after the town used to create its dam. The Hoover Dam was originally named “Boulder Dam” in this way, for example.

But the town of Gad, West Virginia was flooded to create this reservoir, and officials didn’t like the sound of a “Gad Dam,” so they went with the much more pleasant Summersville after a neighboring town. The rest is history!

When you think “West Virginia,” your mind probably jumps to the forested peaks and valleys of the Appalachian Mountains. You’d be right, for the most part, to evoke this image—but that’s what makes Summersville Lake so intriguing! It defies the norm, providing a lush oasis at the heart of an otherwise rocky, hilly, forested expanse. Its pristine water and unique shoreline (characterized by sandstone cliffs that jut out from the coast’s nooks and crannies) lend a tranquil, out-of-the-way feel to this stretch of West Virginia wilderness.

It made such an impression on Skin Diver Magazine (yes—there’s even a thriving scuba scene here) that they dubbed it the “Little Bahamas of the East!” If that’s not a glowing recommendation, we don’t know what is.

What’s biting at Summersville Lake? Quite a lot!

The lake’s ample amount of natural cover in the form of craggy shorelines, trees and other structures provides a welcoming home for species like largemouth and smallmouth bass, walleye, crappie, channel catfish and even trout when it’s stocked by officials, below the dam.

There are many meandering coves and corners to explore, so you’ll never tire of casting your line in new spots. No-wake zones (as well as the gradual quietude of fall) mean that you can enjoy fishing while others go wakeboarding or waterskiing… you can even do both in one day! Who says you have to pick one thing, anyway? Especially exciting to local anglers is the fall drawdown, when the lake level is lowered and fish are more easily accessible throughout.

Speaking of activities—Summersville’s got a lot of them. In addition to fishing, visitors can canoe or kayak their way around quieter haunts, enjoy fast-paced thrills from a wakeboard or pair of skis, or simply enjoy a peaceful cruise around the lake. As we head closer to the peak season for “leaf peeping” (according to the foliage map on SmokyMountains.com, that’s around mid October), Summersville’s 60 miles of shoreline will shine like nothing else—“wowing” locals an visitors alike with vibrant displays of red, orange and yellow. To see the change by boat is certainly a special experience.

End-of-summer blues? There’s no cure like Summersville, where the leaves may turn red, but the lake never loses its spirit of summertime thrills. Enjoy a trip on your Robalo soon!

Our Favorite Tournament Tips 7 Ways to Identify Your Catch Every Time What Happens When You Catch a Great White Shark? Robalo?s Guide to Shallow Water Excursions Fishing Fort Lauderdale: Boat Show and Beyond Just in Time for Thanksgiving: Meet the Turkeyfish Take an On-the-Water Scavenger Hunt with Robalo Fishing Takes Flight: Tips for Using Birds? Help to Find Your Next Catch