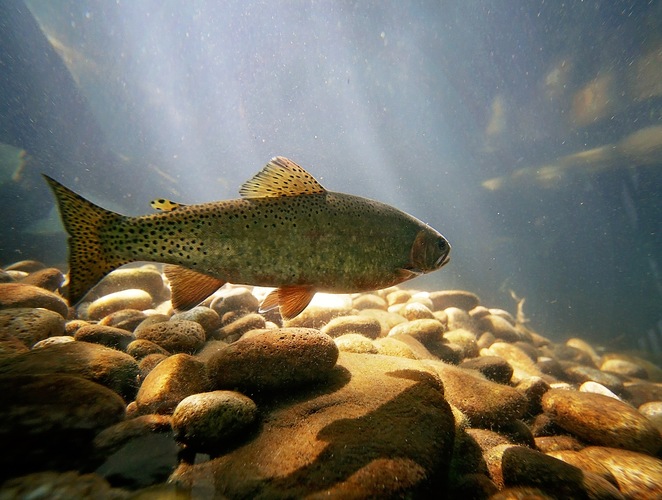 Does fall fishing have you feeling a little topsyturvy?

It’s not just you—anglers across the globe go through the same thing every year, when their favorite lakes (and the fish inside) seem to change overnight.

If you’ve been fishing the same lake all summer, the sudden change—a phenomenon called fall turnover—can leave you feeling perplexed. But rest assured, the seasonal switch isn’t magic, sorcery or anything else incomprehensible by us anglers… nor does it mean the end of your fishing fun for the year. Read on as we explore the ins and outs (and ups and downs) of this seasonal event, as well as some of the ways you can use it to your advantage this fall. Take a look.

Science behind the switch

If you’re not expecting it, fall turnover can be confusing—leaving you to wonder, what happened to all the fish…?

Worry not—they’re still underwater! Finding them, however, becomes a little trickier… but that’s all part of the fun.

While we’re referring to “fall turnover,” the turnover phenomenon, a.k.a. stratification, actually happens twice a year—in fall and spring. In fall’s case, the water that’s been sitting toward the top of the lake or pond becomes colder and, as a result denser. Once it becomes denser (at a certain temperature, which many anglers place around the 50s mark), it sinks to the bottom.

Think back to those old science class experiments, where you might have layered different liquids in a test tube to watch them pile on top of each other in order of density. That’s the same thing going on here. The denser water sinks and the water that was on the bottom, is now on the top. The two halves are, at the time of turnover, somewhat equal in temperature, so fish no longer cling to the same patterns they did in summer. There’s no real differentiating line between the “top” and “bottom” of the water—that line’s now been switched up and blurred—so your fishing techniques may need to change along with it. We’ll tackle this in detail a little later.

While exploring what fall turnover is, it’s also worth noting what it isn’t. Many anglers may feel nervous that their favorite lake will no longer be “fishable” following the turnover, but this simply isn’t true. The fish are still there. In fact, in the weeks ahead, you might even notice a pickup in bites since fish will be preparing for the cold winter to come.

Of course, another common idea is that turnover happens everywhere. But some anglers may be pleasantly surprised to learn that this, too, is more myth than fact. While turnover is certainly a common occurrence, it won’t happen in very shallow lakes or ponds—the sort you’re used to exploring from your Robalo Cayman. In shallow water, the water is freely able to mix and move throughout the year, and thus doesn’t ever need to “turnover.” Turnover is also more prominent in landlocked lakes and ponds—less so in larger bodies of water where there’s lots of wave or wind action.

Our best tip for fishing during the fall turnover? Know what it looks like! Before you cast your line and realize huh, there doesn’t seem to be many bites… you can often determine whether a lake is pre- or post-turnover by looking in the water. If it’s cloudy, with lots of sediment and debris floating by the top, that could be a sign of fresh turnover.

Since no lake will turnover all at once, you can move to another part of the water to continue fishing. Or, of course, you can stick around! The key here is to be flexible. Switch up your technique and opt for more versatile lures, and expect to find bass (and other fish) in unexpected places—by the surface, creeping toward the bottom, or anywhere in between. Once the lake is completely turned over, and the fish are no longer out of sorts, you will be able to fish according to a more dependable routine… and you’ll be glad you didn’t pack up your tackle too soon!

Ready to put your newfound knowledge to the test? Hop on your Robalo and take to the water— who knows what you might catch? You might just surprise yourself along the way!

A Fall Trip to Summerville