Look to the Skies for Your Fishing Forecast 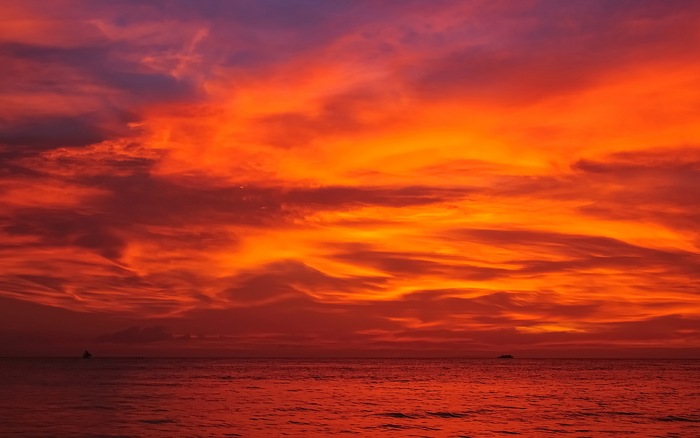 Since ancient times, we've looked to the skies to see what kind of weather was on its way. Today, we have maps, Doppler radar, and the ability to communicate forecasts across the globe in seconds...

...yet still, there's something satisfying (and practical) in being able to identify which way the wind's headed--and what it's bringing with it--based on insight alone.

Below, take a look at some of the simplest ways to predict your fishing day forecast--based on the sights and sounds around you.

When skies are red...

We've all heard the age-old saying: "Red skies at night, sailors delight. Red skies at morning, sailors take warning." Not only is it said to have been passed down from the world's earliest sailors, but this sentiment even appears as early as the Bible! Shakespeare included the idea in his work, too.

So--is there any truth to it? Yes... in many cases, anyway! Bright red, beautiful sunsets are especially colorful because the sun's light is being passed through dust particles in the air--and if that dust is there, it typically suggests calm, still air associated with high pressure systems... a.k.a., good weather!

In the morning, however, the same sort of beautiful sky may mean something less positive. At this time of day, it can suggest that a high pressure system is on its way out, or that the air is filled with moisture. Keep the two meanings in mind so that you can plan accordingly the next time you're observing a beautifully-colored sky.

Haloes in the sky

"Haloes," or bright rings of light around the sun or the moon, aren't just pretty... they can also suggest the presence of wet weather later on. They form as a result of high-altitude ice crystals interacting with the light to produce the angelic, glowing effect. While beautiful, the presence of those crystals hints at moisture moving lower down into the atmosphere and causing rain or storms.

Old rhymes tell of salt clogging its shaker or windows refusing to open, signaling rain later on. What's the connection? Humidity (increased moisture in the air) affects inanimate objects just like it affects our hair and bodies. Just as you can walk outside on a humid day and almost feel the added weight of the water in the air, the same happens to wood (which expands in response to added humidity) and salt that absorbs the moisture and stops cooperating with the shaker. Today, in response to this common problem, iodized salt has anti-clumping ingredients that prevent this from happening... but if you notice any of these simple signs, you'll know what they might mean!

Knowing these handy ideas doesn't mean you should forego weather tech (like your phone or radio) altogether--but these tips can pick up where the forecasts leave off, with detailed, nuanced information specific to your spot on the water.

At the very least, you're equipped with a party trick of sorts--friends will watch in awe as you foretell an upcoming storm, or picture-perfect afternoon!

Inside the Doldrums: The Ocean?s Stillest Waters

Fly Fishing from Your Robalo: A Fun New Twist Reel in the Fun (and Facts) During Boat Show Season The 5 Biggest Benefits of a Family Fishing Trip How to Enjoy Summer Fishing to the Fullest
©2022 Robalo Boats, LLC. - all rights reserved.