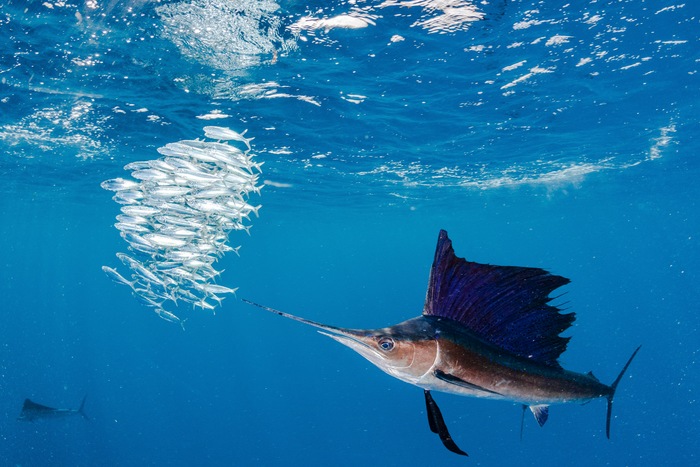 Blue skies, balmy temps and a bevy of prize-worthy catches beneath the surface—in Miami, the winter fishing scene is alive and easy to enjoy.

Whether you’re in town for the Miami International Boat Show, or simply want to plan your next great angling adventure, we’ve got you covered! Just read on to learn what’s biting at this time of year—and how to land the catch.

If there’s one thing the amberjack is known for, it’s size—this may not be an overly colorful fish, but it’s one you’ll be proud to catch! This fish is sometimes called a “sea donkey” or “reef donkey” because its size makes it a strong, stubborn fighter.

Amberjack, especially the biggest ones, can often be found in deeper water. They tend to gravitate toward sub-surface structures, including natural and artificial reefs. Many anglers say getting the amberjack to bite is the easy part—live bait is always a good bet—but the real “win” happens when you pair your own patience and strength with heavy-duty tackle that can handle the weight.

Land a smaller amberjack? That’s still something to smile about—this lean, mild fish makes for a great entrée! Because it lacks a strong, distinctive flavor, it can readily pair with a number of delicious seasoning schemes, like classic Floribbean citrus blends. Try it yourself and see why amberjack is worth the fight!

They don’t call this fish the “king” for nothing! King mackerel can be impressive, photo-worthy whoppers, and call for lots of line—after all, they are nicknamed “smokers” because of how lightning-quick the line zips off the reel.

Now that you know what to expect, head out with confidence! A universally favored way to catch king mackerel is by trolling. Opt for live bait at a slow, easygoing trolling speed for your best chance at landing one of the big ones.

The sailfish is one of the most iconic catches you’ll fish for here in Florida. Throughout the Sunshine State, the signature fish—known for its striking dorsal fin, a.k.a. its “sail,” and long, pointy bill—graces lucky fishing t-shirts, storefronts, city welcome signs, you name it.

Sunshine State anglers love the sailfish, and for good reason. So, how do you go about catching one of your own?

By heading to Miami you’re already in a perfect position. Sailfish thrive off the state’s Atlantic coast, especially during the milder winter and spring months. While you can’t go wrong by trolling offshore with live bait, don’t overlook fishing grounds closer to shore, too, as sailfish have been known to appear here. Check out reefs as well as those spots where shallow water drops off to the deep blue expanse. You might be surprised what you find!

The striped, long-bodied wahoo never fails to make an impression as far as photo-worthy catches go. It’s hard not to “ooh” and “ah” when your friend lands one, so why not try it out yourself?

Wahoo like to gather around rocky sub-surface ledges, wrecks and weed lines, so be sure to scope out these spots if you’re in search of the slender, flashy fish. High-speed trolling is often recommended, since these fish tend to move pretty quickly.

Once you land the catch and snap your photo, look forward to a delicious dinner back on shore. Wahoo is noted for its sweet, mild flavor—some describe as reminiscent of chicken when it’s grilled up and seasoned. The Hawaiian word for wahoo, “ono” actually means “good to eat” or “delicious,” so digging into fresh wahoo is a well-respected culinary tradition!

Another catch that’s as delicious as it is beautiful, the red snapper is a prized pick for many Miami anglers, especially at this time of year. To try your own luck, seek our snapper in areas with structure (such as natural or artificial reefs, rocks and similar spots) and drop your line vertically. This isn’t a distance fish like the sailfish or king mackerel, but it can still put up quite an exciting fight for still-fishers as it jerks beneath the surface!

Ready to put your know-how to the test? Hit the water at one of many choice Miami fishing spots, from the flats of Biscayne Bay to the action offshore. Wherever you roam, you’re in for a treat.

Our Favorite Tournament Tips 7 Ways to Identify Your Catch Every Time What Happens When You Catch a Great White Shark? Fishing Fort Lauderdale: Boat Show and Beyond Just in Time for Thanksgiving: Meet the Turkeyfish Robalo?s Guide to Shallow Water Excursions Turn Thanksgiving Leftovers into Fishing Fuel Discover How to Fish From the Shore: Our Guide to Surf Fishing

Five Miami Must-Dos for Your Winter Getaway Fishing Fort Lauderdale: Boat Show and Beyond Must Do Miami: Our Top Boat Show Attractions for Anglers Reel in the Fun (and Facts) During Boat Show Season
©2022 Robalo Boats, LLC. - all rights reserved.